“And I saw another sign in heaven, great and marvellous, seven angels having the seven last plagues; for in them is filled up the wrath of God. And I saw as it were a sea of glass mingled with fire: and them that had gotten the victory over the beast, and over his image, and over his mark, and over the number of his name, stand on the sea of glass, having the harps of God. And they sing the song of Moses the servant of God, and the song of the Lamb, saying, Great and marvellous are thy works, Lord God Almighty; just and true are thy ways, thou King of saints. Who shall not fear thee, O Lord, and glorify thy name? for thou only art holy: for all nations shall come and worship before thee; for thy judgments are made manifest” (Rev. 15:1–4).

Seven angels are introduced here, and we are given sort of a prelude to the next round of judgments. Their approach is said to be another “sign in heaven,” and it was a sign that was “great and marvelous.” These are described as the seven last plagues, meaning that we are now talking about the final and complete destruction of Jerusalem in 70 A.D. They bring with them the fullness of the wrath of God. This is it.

We will see in v. 6 that these angels come out of the heavenly temple, and so it is not surprising that we also see various aspects of temple worship described, which would include the crystal or glass sea. This is not a lake or an ocean out in front of the temple, but is rather the laver that in the Old Testament was made of bronze, in which the priests would wash themselves. The word here is thalassa, which is the same word used in the Septuagint for the bronze laver (1 Kings 7:23). As the laver was used for purification of the worshipers, the fact that the glass here was mingled with fire probably indicates cleansing in Heaven, as opposed to mass destruction on earth. The original laver for the tabernacle was small, in which the priests would wash their hands and feet (Ex. 30:17-21; 40:30-32). Solomon’s version was huge, resting on the backs of bulls. It probably represented the Red Sea, and the great victory that God had won for Israel there. The heavenly version was greater still, and represented a greater victory still.

Those who had gained the victory over the beast, and over his image, and over his mark, and over the number of his name—meaning the believers who had stood firm in the Neronian persecution—were given the harps of God and they all stood on the sea of glass in order to be able to sing. They were purified at the laver, and then presented their praise.

We are told that these faithful ones sang two songs. The first was the song of Moses, indicating that Jerusalem was identified with the old Egypt that had fallen under judgment. Just as Egypt had been left a smoldering ruin, so also Jerusalem was going to be left the same way. The second song was the song of the Lamb, and we are given the content of that song.

This chapter began with the sign in Heaven being described as “great and marvelous,” and here that phrase is repeated. They sang that the works of the Lord God Almighty were great and marvelous. He is the King of saints, and His ways are just and true. His name shall be glorified, and they sing that no one will fail to fear Him. And why? Because He alone is the Holy One, and all nations will come and worship before Him. They will do so because His judgments, in all their severity, will be made manifest now.

Just as Miriam and the women with her danced on the shores of the Red Sea, so the faithful ones who stood against Nero will sing as they stand on the Crystal Sea. The thing they share in common is the fact that they know that the songs of the saints in Heaven provide the soundtrack for judgments on earth. The ferocity of God’s judgments when they finally fall upon the insolence of rebellious man is not “a problem” to be apologized for. The ferocity of God’s judgments are here celebrated, and we see that they are the basis for all the nations of men coming to their senses and streaming to the Lord of the nations, the Lord Jesus Christ.

Why will the nations come and worship? Because the wrath of God has been made manifest. 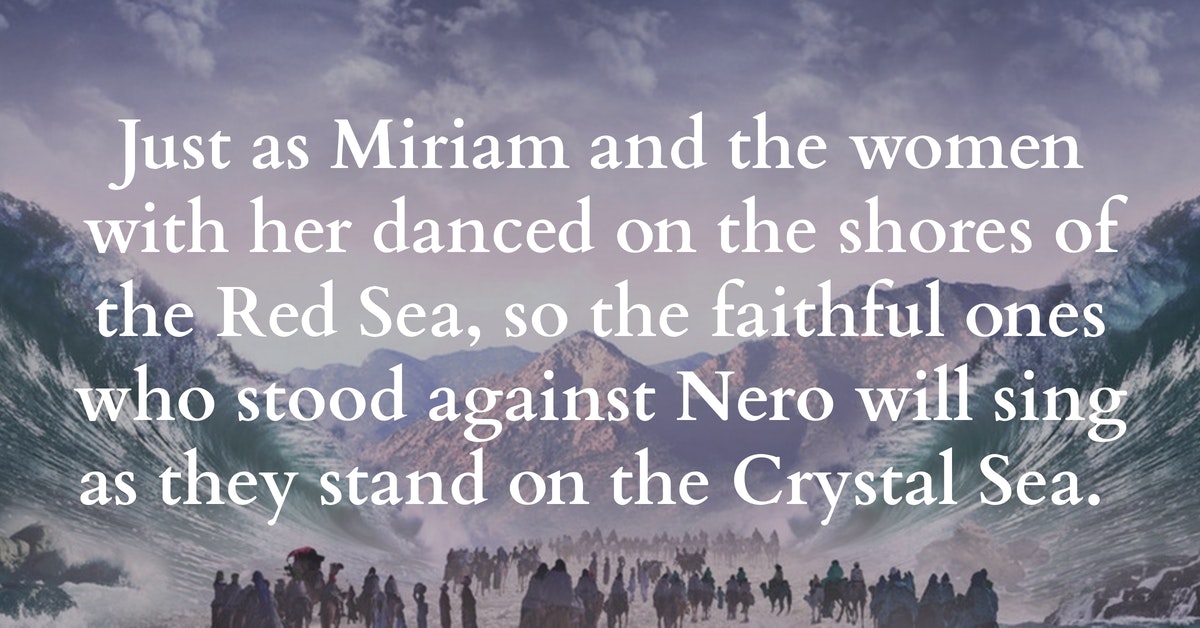