“And when he had opened the third seal, I heard the third beast say, Come and see. And I beheld, and lo a black horse; and he that sat on him had a pair of balances in his hand. And I heard a voice in the midst of the four beasts say, A measure of wheat for a penny, and three measures of barley for a penny; and see thou hurt not the oil and the wine” (Rev. 6:5–6).

Now we come to the third seal, and the third horseman of the Apocalypse. Just as had happened with the first two, one of the living beasts invites John to “come and see.” John does so, and what he sees is the destructiveness of famine. We can tell that this is the horseman representing famine by what he carries (balances), and by what the voice from the midst of the four beasts says. The pronouncement is about the cost of food, about which more in a minute. In addition, we have some background information from the Old Testament.

“And when I have broken the staff of your bread, ten women shall bake your bread in one oven, and they shall deliver you your bread again by weight: and ye shall eat, and not be satisfied.” (Lev. 26:26).

In other words, eating your bread by weight or by measure is an indication of not enough, and this horseman rides out with a pair of balances in hand. And we also have the association of the color black with famine: “Our skin was black like an oven because of the terrible famine.” (Lam. 5:10).

During the siege of Jerusalem (which is what this prophecy is about), there was a terrible famine. There had been a lot of food stored in Jerusalem, but the rival factions among the rebels mentioned earlier would periodically destroy the supplies of the other factions. The end result was, naturally, terrible famine. That black horse did ride through Jerusalem. 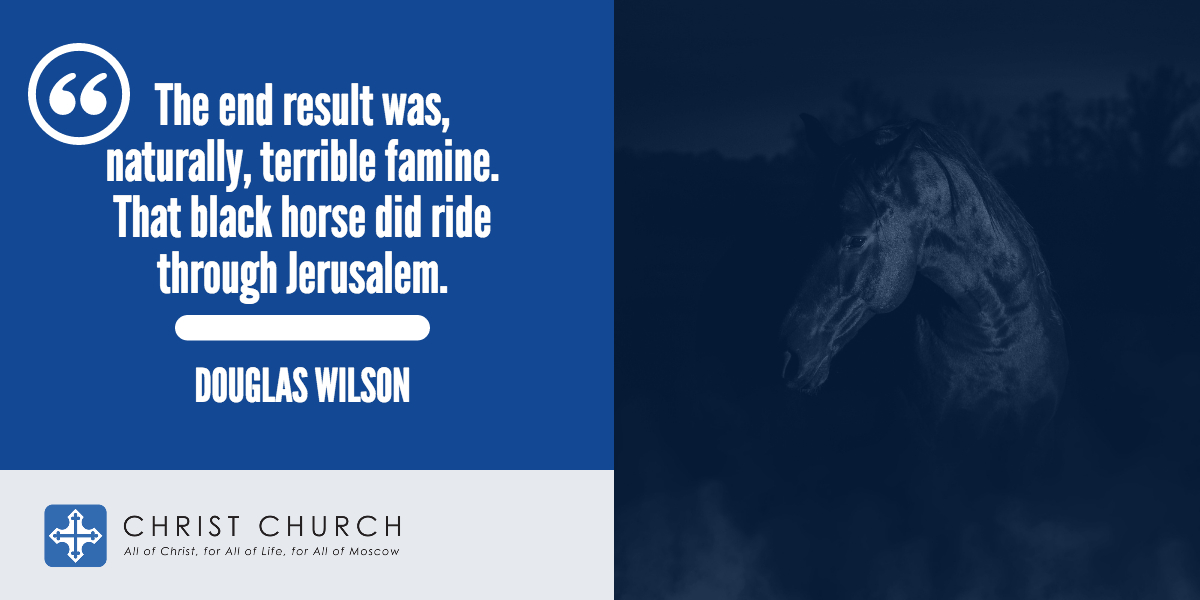 Note the echoes of this language in what Josephus wrote about the siege.

“Many there were indeed who sold what they had for one quart; it was of wheat, if they were of the richer sort, but of barley if they were poorer” (Wars 5.10.2).

A denarius was the average pay for the average worker of that time, rendered here by the AV as “penny.” And a measure of wheat is what it would take to feed that man for a day. If he wanted to feed a family, he would have to resort to barley. The cereal crops were affected, but not the oil and wine.