Missions Conference 2022: As the Waters Cover the Sea 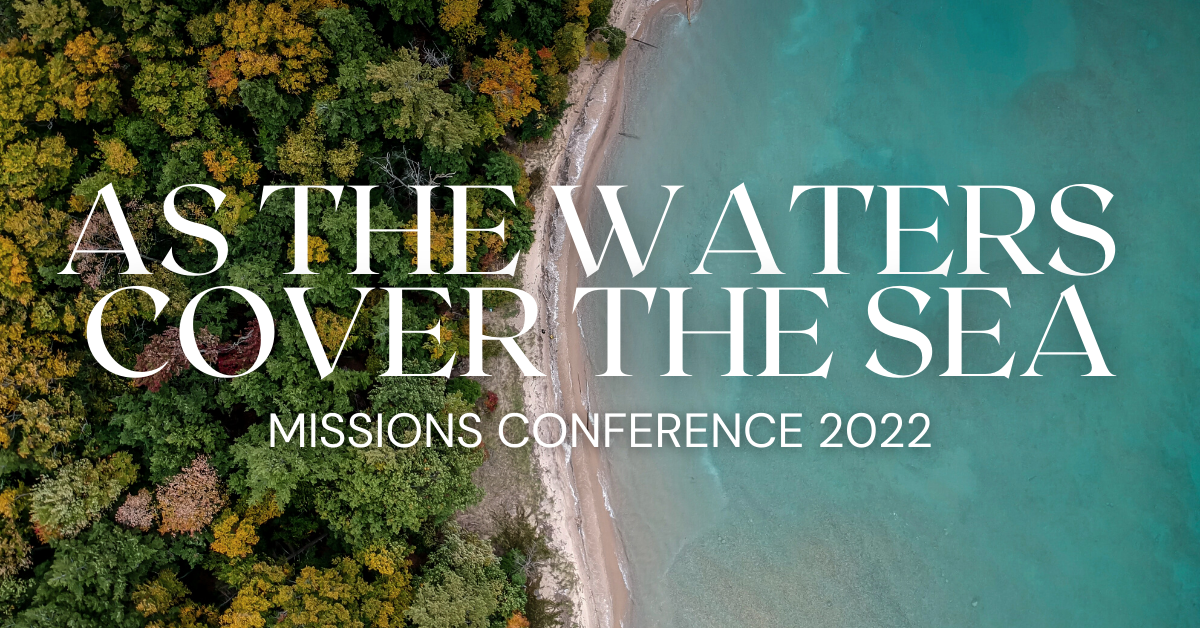 Join us in Moscow, ID, Feb. 4–5, for our annual Missions Conference. Register below!

The gospel is good news for all people, in all lands, at all times. The call of the church is to obey Christ’s command to teach the nations obedience to Him, as the King of all the earth. The great promise of the prophet Hosea is that the knowledge of the glory of the Lord shall cover the earth as water covers the sea. But between the commencement of Christ’s kingly rule of earth and the day when he comes again to judge the living and the dead, there will be ebbs and flows.

While initially in the gospel’s advance it centered in Jerusalem, and then took root in the West, we see in more recent decades how the gospel is rapidly advancing in South America and in the Eastern lands. But oftentimes, Christians in the West are often unsure of how to take the gospel and share it with their fellow Westerners; but more so are stumped by how to share the good news with those from very different cultures and religions.

Missions Conference 2022 is intended to help answer those questions, while equipping the saints where they are to be ready to share the word with not only their neighbor but the foreigner in their midst as well.

James Rayment was born in England, but has lived in Seattle for 10 years with his wife and 5 kids. Since 2012, James has been building relationships with Muslims in Seattle and around the world. Because of this ministry he founded The Al-Ma’idah Initiative, a Christian nonprofit that equips the church to understand and communicate better with Muslims on a range of religious, political and worldview issues. His goal is to create genuine friendships without shying away from the exclusivity of Jesus’ message.

Francis Foucachon was born and raised in France, and trained as a young man to be a chef in the elite world of lyonnaise gastronomy. After working in that field for seven years, he was mentored and trained for the pastoral ministry by a missionary church-planter. He moved to the United States after marrying Donna Rapacz, a high school French teacher from Florida, but they returned to France a few years later for Francis to attend the Reformed Seminary in Aix-en-Provence. During this time, he was part of a church-planting team with one of his professors, and helped start a French-speaking Christian school. After graduation, Francis was ordained as a minister in the Presbyterian Church in America. Under the auspices of the PCA, Francis and Donna and their five children planted a church in the suburbs of Montreal, Quebec and a church in Lyon, France. Francis completed the course work in the Doctorate of Ministry program at RTS Orlando, and was the Evangelism Explosion Director for Quebec.

Francis and Donna returned to the United States to be with their children as they went through college. To support his family during this time, Francis created a high-end French restaurant called West of Paris, which he sold in 2011 to return to full-time ministry. He is President of Huguenot Heritage, working in partnership with Third Millennium Ministries as French Project Coordinator, with the mission of training francophone church leaders worldwide.

Csaba Leidenfrost was born and raised in Liberia, West Africa. In 1978 he came to the University of Idaho for college and completed a B.S. in Wildlife Resource Management. After graduating in 1983 and marrying his wife, Lisa, the two joined the Wycliffe Bible Translators in 1984. From the summer of 1984 to the fall of 1985 Csaba did graduate studies in linguistics and translation at the University of Washington and the University of Texas Arlington. Assigned to work in Côte d’Ivoire, he and his wife studied French in France from 1985-1987. From 1988 to 2004 Csaba and his wife were based in a village in Côte d’Ivoire among the Bakwé people raising their four children and studying Bakwé language and culture. During a period of civil war in Côte d’Ivoire they moved to Bamako, Mali for a year and a half to continue their work remotely. After 2006 they returned to the USA where Csaba continues to work with the Bakwé remotely making two trips per year on the average as he continues to work with his Bakwé colleagues on the Bakwé Old Testament translation.

Over the years Csaba has been involved in all aspects of Bakwé language development, including the following: working with Bakwé colleagues to analyze the sound system of the Bakwé language and develop a written language, publishing pedagogical materials for teaching adults to read and write, training teachers, publishing around 60 pieces of literature in the language including Bakwé folktales, short stories, and health booklets, and translating the New Testament.

For fun Csaba enjoys camping and hiking with his wife, sailing with friends, and most recently para-gliding! Csaba and Lisa have four married children, three of whom graduated from New St. Andrews College, and they have eleven grand-children and one more on the way.

Douglas Wilson has been pastor of Christ Church in Moscow, Idaho for over forty years and is the author of more than a hundred books. He blogs prolifically at dougwils.com and can also be heard weekly on The Plodcast. Doug and Nancy have three children and lots of grandchildren.

There are two registration options below. The first one is $10 and covers your lunch that we will provide on Saturday. The second one is free and allows you to bring your own lunch or make other plans. Please register for each individual attending including children in their own seats. Thank you!